When describing the function of the legal department at his workplace, Schneider Associate General Counsel Justin Bauer turns to sled dogs.

“We—the business, departments, drivers, and other support functions—are like one cohesive sled dog team moving toward the finish line. The business and, ultimately, our professional drivers are the lead dogs on the team. They dictate direction and goal,” Bauer says. “Legal is one of the dogs in the back providing the support. We’re going to weigh in, and if we find something that’s too risky or if we think we’re going astray, we’re going to put our paws down and figure this out. We don’t drive what’s going on. We do what we can to say yes and support everyone else.”

Maybe sled dogs are on Bauer’s brain during his December 2020 Modern Counsel interview because Schneider is headquartered in icy Green Bay, Wisconsin. Maybe it’s because he’s been watching a lot of Life Below Zero on National Geographic. Whatever the case, the COVID-19 pandemic has put Bauer’s canine comparison to the test. While the rest of the world shut down, he and his legal team had to think creatively to keep the company’s fleet of nine thousand company tractors—not to mention its ten thousand drivers—on the road.

On the one hand, Bauer describes truck driving as “the ultimate social distancing job.” But he also explains how constantly traveling across country—sometimes for days or weeks at a time—makes it difficult for Schneider’s drivers to protect themselves from COVID-19.

“Driver’s don’t have sinks in their trucks,” Bauer explains. “Most people get to go home and wash their clothes or their masks. Drivers can’t do that every day.” Another complication was that, in certain states, many truck stops and public rest stops were closed at the onset of COVID-19. The irony, of course, is that Schneider’s vehicles—or that of any trucking company, for that matter—are often delivering goods that make other lives’ easier during a pandemic. 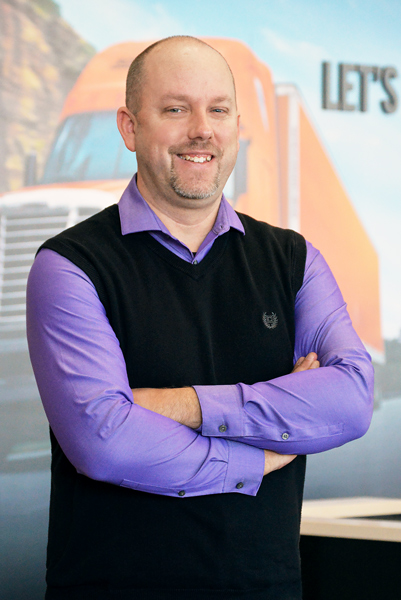 To ensure the safety of the company’s drivers, Schneider formed a coronavirus task force of forty employees, with Bauer and one of his colleagues representing the legal department. First and foremost was securing personal protective equipment (PPE) for everyone on the road.

“It took a massive coordination effort because frankly, when we first started, everything was sold out,” Bauer remembers. “You couldn’t get anything. So we had to try to get it where we could, compile it, get it out to all these different locations. We purchased about 1.3 million masks, about a million disposable gloves, and about eight thousand gallons of hand sanitizer. The number of masks we landed on surprised me at first, but if you think about how often a driver can wash a mask, the masks have to be disposable.”

For the hand sanitizer, the task force had initially sourced the liquid from local distilleries.

“We actually bought big drums and big gallon packs,” Bauer continues. “We put the sanitizer into little bottles and put the bottles in our operating centers and operating points so our drivers could take a couple with them when they go on the road. There was a lot of effort put in by our team—particularly our driver services team—and I’ve got to give kudos to them for doing it.”

In addition to coordinating the more tangible acquisitions of PPE and hand sanitizer, Bauer and the rest of the legal department were tasked with having to navigate a constantly evolving slate of COVID regulations. And not just for Wisconsin—Schneider has drivers in every single state of the continental US as well as in Canada.

“At the beginning of this, every single day, there were new regulations and new orders coming out that had to be digested,” Bauer explains. “The legal department ended up communicating to the business folks what needed to be done, and from time to time, we’d have to assess what our obligations were.”

Legal sifted through this byzantine web of regulatory matters behind the scenes—electronic registrations for out-of-staters, mask mandates that vary from state to state, etc.—with the goal of creating the smoothest work experience for everyone else. Once again, Bauer’s department is the dog in the back, providing the support necessary for the business to press toward its goals.

“Legal is one of the [sled] dogs in the back providing the support . . . We don’t drive what’s going on. We do what we can to say yes and support everyone else.”

“It’s about getting the truck drivers to the point where they don’t have to worry about what they’re doing,” he says. “If they need to know about something, we let them know. If they don’t need to know, we don’t want to bother them with it. Let them do their jobs. They’re the ones on the front lines.”

This solicitude has not gone unnoticed by Schneider’s partners. “Justin is one of the most pragmatic and thoughtful inside counsel with whom we work,” says Mike Phillips, partner at McGuireWoods. “His attention to detail, combined with his deep knowledge and understanding of the transportation industry, help set him apart.”

Obviously, the legal department looks out for others at Schneider partly because it’s in their job description. But Bauer also feels a kinship with everyone at the company that goes beyond his workplace responsibilities. He’s been at Schneider for twelve years now, and he originally came to the company so he and his wife—also a Schneider employee in the regulatory department—could be closer to family and their hometown of Menominee, Michigan, just across the Wisconsin state line at the bottom of the Upper Peninsula.

“There are just a lot of good, down-home Midwestern people here at Schneider,” Bauer says. “I know it sounds like a cliché, but there are great people, it’s a great company, and it’s interesting work.”