When Shellie Smith joined the human resources department of legal-services firm LeClairRyan in 2011, one of the first things she did was visit a number of the company’s regional offices to handle outstanding issues. On these trips, she quickly noticed a problem: the growing firm of about 325 lawyers had its two hundred direct attorney support staff reporting directly to the central human resources department, a small team that consisted of just Smith; her boss, Jennifer Mistal; and an HR generalist.

“There was no set structure for them to report into,” Smith says, adding that this led to a lack of formal coordination between attorney support staff and those in central business operations. It soon became clear that this organizational approach wasn’t going to be sustainable for increased growth. “I couldn’t get close enough to people to effectively manage them,” Smith says.

Luckily for LeClairRyan, Smith had extensive prior experience with regional talent management thanks to her many years in retail, most recently with Circuit City. Drawing on that background and her exposure to the retailer’s regional management model, Smith and Mistal set out to put together a pilot program for a new position: the regional office manager (ROM), who manages staff on the ground for several offices, while acting as a liaison between those offices and those in central business operations. The position has since taken off and improved firm efficiency and communication, but establishing it was not without its challenges.

In the beginning, to get leadership buy-in, Smith knew she had to make a business case, so she produced a formal proposal outlining the importance and objectives of the position and the value it would ultimately deliver for the firm, including enhanced regional operations and better management of people and finances. Leadership agreed to the proposal, and Smith launched two inaugural office manager positions (“regional” wasn’t originally part of the tile) in San Francisco and Boston.

The experiment in San Francisco was a hit and remains the gold standard for what’s possible with the ROM position, and the original person who took the job still occupies it. The experiment in Boston, on the other hand, at first hit some setbacks, and for a time the employees in that office thought the position might not work. Smith knew she had to fix the situation fast for the program to succeed. Both Boston and San Francisco were outside hires, so Smith decided to hire internally in Boston to make the position more credible. “We realized that an internal understanding and credibility was the driver for success,” she says. She found an employee in accounting for the job, and in the process she discovered a reliable method of recruitment—moving people within the firm and expanding their roles. 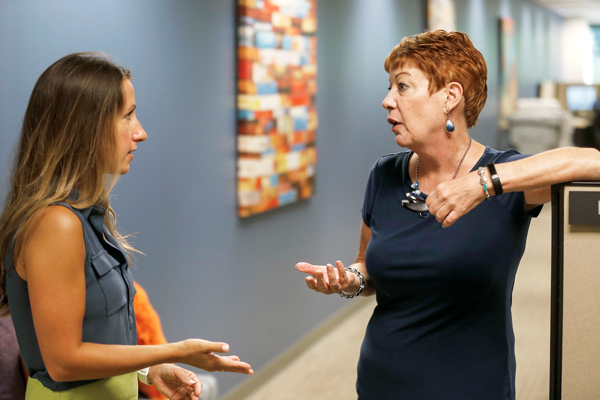 Once San Francisco and Boston proved to be successful, Smith established the ROM role for additional offices. By 2015, three years after Smith’s initial proposal, LeClairRyan had ROMs covering the entire firm, and it decided to bring paralegals into the support structure as well. To continue to increase efficiencies, Smith and her team have since worked to develop the positions further by making ROMs accountable for office-level decisions and giving them budgets to manage.

Since the launch of the ROM program, LeClairRyan has seen improved efficiencies in regional office operations and year-over-year decreases in overtime and temp expenses, Smith says. The ROMs have also allowed the HR department to continue to advance while internally building and stretching development. The ROMs are now the go-to people for administrative operations for all offices and conduits for information, according to Smith. “They are the glue that holds the business’s operations together,” she says. “The lawyers still provide the highest levels of client service, but the ROM’s are enabling it to happen.”

Iron Mountain was proud to assist LeClairRyan in consolidating its records and information-governance program. The company is now able to follow compliance and security protocols very easily, and client audits and meeting OCGs have become easier to administer. Lastly, by consolidating, it is able to create synergies and economies and realize enormous savings. We look forward to continued partnership with LeClairRyan.