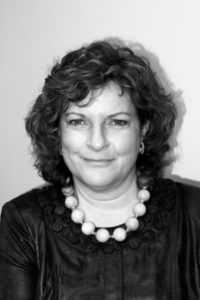 Ask Maxine Verne why she’s been at SCOR for twenty-seven years, and it’s hard for her to land on any one topic. She could point to the reinsurance company’s International Gender Network, where she currently sits on the board to ensure that there are constant opportunities for gender diversity. She
could also point to her work with international compliance—a field that has become increasingly complex and fascinating as her career has progressed. But one of the benefits Verne appreciates most about being at SCOR—organized into property and casualty reinsurance, life reinsurance, and an asset management business—is the high value it places on work/life balance. Outside of the office, she’s able to fill up her time with one of her greatest passions: horses, which she started riding at a young age.

Sometimes, Verne’s two worlds of legal and horseback riding even cross paths, and the strides she’s making in the legal realm are not going unnoticed. “Maxine is a savvy lawyer who knows the reinsurance business inside and out. Not only does she practice law at the highest level and focus on issues of gender diversity, but she also finds time to bond with her horses. It’s an inspiring balancing act,” says Nicholas F. Potter of Debevoise & Plimpton LLP.

During Verne’s discussion with Modern Counsel, the senior vice president, general counsel, and corporate secretary of SCOR shared how she got into her favorite pastime and how it makes her a more considerate lawyer.

When did you first get into horseback riding?

I have been in love with horses forever. The first book I read as a child was about a pony. It was by Walter Farley, who wrote The Black Stallion, and it was called Little Black, A Pony. I also used to pretend that my bicycle was my horse, or multiple horses. My father used to put me on pony rides. It’s always been that way.

My brother took me for my first riding lesson when I was seven years old. After that, I took classes and more lessons. I can’t think of a time when I didn’t love riding.

Did you grow up in a rural area?

No, I lived in Queens. There was a stable about a mile away. So at seven years old, I would bike all the way up to the stable. I would save all my money and take one lesson a week. It was a half-hour lesson, then I’d stay there as long as I could to help. This was every Saturday.

When I got a little bit older, my mother didn’t have any interest in letting me ride horses. But when I went to sleepaway camp, I had a friend who also rode horses. So she and I went to a place in Great Neck on Long Island, where we took lessons. Then, I persuaded my mother to let me go to a camp that offered horseback riding. It was great.

There was one time when I was fifteen and got significantly injured at a stable. It was an accident. My mother wanted to sue the barn where I got injured, but I told her if she did that, I’d testify against her.

Did your love of horseback riding carry you all the way through to adulthood?

Well, I made the mistake of actually buying my first horse right as I was graduating law school. I worked at a barn, and there was a horse there. So that was a bad time to try and study for the LSAT. It was not ideal. But I bought a horse and she had medical issues, so I had to sell her to somebody else. Then, I stopped for about fifteen years, but eventually went back to it and haven’t stopped since.

How did you get back into it after the hiatus?

I always loved animals. That never changed. What happened was I went away one weekend with a friend of mine to a place where you could go horseback riding. I decided when we came back that I was going to start riding again. So I went out to one of the barns I knew on Long Island and just started riding.

These days, it’s not enough for me to just ride once a week, because I don’t ride just to get on a horse. I ride because I love the animals. For example, where I am, there are a lot of wealthy people who own horses. So they ride their horses, they hand their horses over, maybe feed them a carrot, and that’s it.

But I go and groom my horses. I graze them. I take them out for grass. I do a lot of things with them on my own. For me, it’s about the animal. It’s not just about the riding.

What is that draws you to horses specifically?

That’s a good question. It’s hard to answer. There’s the saying, “There’s something about the outside of a horse that’s good for the inside of a man.” And I think that’s very true.

For me, it’s horses, dogs—every animal. But a horse is a one thousand-pound animal that you get to share with, communicate with. I have one horse that I’ve owned for over twenty-two years. He doesn’t want to be ridden. And that’s fine. But he wants me to do things with him. I don’t ride him, but I’m teaching him how to bow. I’m teaching him hand signals. We go for walks. It’s very peaceful.

Would you say that the peacefulness is a good counterbalance to practicing law? Is it a good way to take a break from a busy schedule?

It’s a combination of things. It’s not the riding itself. It’s the horsemanship and the riding. One, it takes a certain amount of discipline. Two, it’s an escape. Because I have three horses, it takes me a good four, five, six hours to go do something with them.

You cannot be thinking about work when you’re riding a horse. If you’re distracted, you’re not doing your best by the horse. You really have to be there and in the moment. You cannot be overanxious. You cannot be intolerant. You have to have patience.

And that teaches you patience with people. Clients, traditionally, are not always easy. They have expectations. Everybody wants something now. And I am not what you would call a particularly patient person, but because of the horses, I’ve learned the importance of being patient. You can’t be abrupt with a horse. You can teach them bad habits by being abrupt or intolerant with them, and you’re going to get a bad result.