Carl Bergetz, acting general counsel for Rush University Medical Center (RUMC), hasn’t followed the typical course—whether it be to law school, to the private firms where he practiced, or to his current position. He tells Modern Counsel he’s driven by a deep calling, which has also led to a slightly unorthodox approach to his responsibilities.

You describe yourself as a person whose strengths and philosophies don’t necessarily sound like they would come from someone who practices law. How did you end up becoming a lawyer?

I’m not much of a planner, so my professional path has been serendipitous. I always thought I was good at communication in all its forms and—especially in my younger days—had an overdeveloped sense of justice. I would get outraged at things that seemed unfair or nonsensical. It wasn’t that I dreamed of being a trial lawyer, but law seemed like a profession where that outrage could be addressed. Over the years, my outrage at injustice was tempered by a lot of humor about the absurd, and my interest in communication proved to be more creative than stereotypically legal. But I was still driven by my interest in working for the greater good and in communicating any way I could. In both those areas, I found humor and a creative perspective to be very helpful.

What led to the opportunities you have had throughout your career?

My tendency is to let doors to new opportunities remain open as long as possible and use the time to determine whether or not they seem appropriate. If I choose to walk through, then I dig deep to learn everything I can about what I find on the other side. I’ve done that with antitrust in private practice (reading and writing about law and economics), the political side of the law at the attorney general’s office (writing on political theory, law, and popular culture), and about health-law issues (writing and presenting on crisis management and cultural change at academic medical centers). I didn’t expect or plan on any of those areas of expertise, but the doors opened, I went in, and I dug in deep.

What exactly led you from one practice to the next?

I started my legal career as defense counsel with McDermott, Will & Emery in Chicago, but then I felt the need to see the other side of the aisle and worked for Cooper & Kirkham, a plaintiff’s firm in California. While my private practice work was very satisfying, after a certain point the focus seemed too narrow. Regardless of the outcomes or which side I represented, I felt I needed to be involved in a bigger fight for justice and benefit to the public.

I mentioned that to Fay Clayton (an iconic civil litigator and former legal counsel for the National Organization for Women), one of the partners at Robinson, Curley & Clayton, the firm I was with at the time. She introduced me to Abner Mikva, a former Illinois congressman, chief judge of the US Court of Appeals for the District of Columbia Circuit, and White House counsel to the Clinton administration. Through his charitable organization, the Mikva Challenge, which is dedicated to educating young people on the good that government and the political process can do, I developed a network that led to Illinois Attorney General Lisa Madigan. She provided my first opportunity to do work on issues in the public interest.

After six-and-a-half years as a government lawyer, I began to crave new challenges and was interested in working in-house so I would have a better understanding of clients’ internal processes. Anne Murphy, who was a colleague from the attorney general’s office, had become general counsel at RUMC and she offered me a position and an opportunity to still be part of a public service mission.

What experiences in your background prepared you for the demands of this new environment?

Another colleague from my private practice days had advised me that you have to be an adrenaline junkie to be in-house for an urban medical center. Its services operate around the clock and are constantly generating new issues—many of them emergencies that need immediate attention. I was used to crisis management from the attorney general’s office and it had taught me the importance of creativity and having a sense of humor in facing difficult circumstances. You still have to be professional in your approach, but a good lawyer and crisis manager instills confidence and helps clients feel at ease, and humor does that. It also builds bonds within a team.

Can you give an example of how humor helped your team?

I was in the attorney general’s office when Governor Rod Blagojevich was arrested. Under normal circumstances, our office represented the state and the governor’s office, but we found ourselves in an adversarial position with the governor in order to protect the state. We came up with the idea of a temporary restraining order to prevent a governor from governing. Ultimately, the restraining order failed, but we recognized both the absurdity and the seriousness of what we were doing. 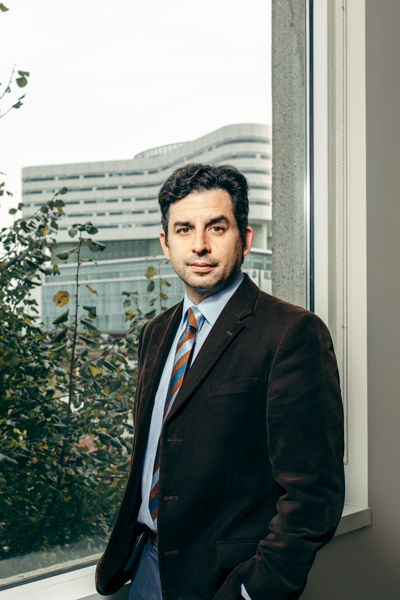 Have you brought any part of that culture to RUMC’s legal department?

We’ve done a lot of recruiting and hiring since I’ve been here and definitely look for staff that has what I call “a lot of play in their joints.” Competence is a given, but humor and creativity are intangibles they all have that help them deal with some of the absurdity we face. For example, we deal with incredibly serious matters like end-of-life questions, professional liability and risk issues, and institutional accreditation. They all have huge downside risks if they’re not addressed appropriately, but to do that effectively, we have to get vastly different types of people—faculty, physicians, medical staff, policy makers—often with very different perspectives on a given matter, all aligned and moving in the same direction.

It’s like trying to get one hundred people who are used to doing things their own way all rowing in the same direction at the same time. Along with the absolute necessity of doing that successfully, you have to admit that there’s an element of absurdity to the concept. So, yes, humor is part of what we do. It helps good lawyers align different constituencies so that everyone is rowing in the same direction.

What other philosophies have you brought to your team?

We expanded our focus from medical malpractice and liability to a more comprehensive approach that addresses how regulation affects every decision in the hospital, from leasing space to a physician to antitrust issues when we partner with other organizations. It’s helped medical and business staff understand that lawyers should be at the table to plan strategies at the outset, not just after a problem emerges in patient care.

As part of that approach, we’re also introducing a new chief risk officer and a robust database system to help identify patterns and trends. Data analysis will help us develop and implement best practices and avoid issues proactively. Stakeholders will also be able to access a single repository of information that enables them to share expertise and perspectives. That will be very important moving forward since certain areas like neurology and ob-gyn are seeing higher acuity patients.

Is the team involved in any other major initiatives?

We’re reorganizing the Rush system to have an umbrella parent organization to fully integrate with Rush Copley Medical Center, Rush Oak Park Hospital, and the university. That will streamline governance, create operational efficiencies, and support partnering with other institutions as we continue
to grow.

Given how your career has evolved, does serendipity still play a role?

Improvisation and flexibility are still important since the law and the environment are always evolving. However, they’re supported by three principles: kindness for others, accountability, and collaboration. With those in place, the legal department and I get to support the medical teams who improve the health and well-being of large groups of people. That goes a long way toward satisfying my sense of justice and my need to serve a bigger purpose.