Coriant’s Ken Rudofski shares how he built the company’s legal department from the ground up, and how the landscape has changed dramatically

In this generation’s business climate of constant mergers and acquisitions, it’s rare for corporate legal executives—or any executives for that matter—to have built their own department from the ground up. But that’s exactly what Ken Rudofski has accomplished at Coriant, where he serves as vice president and assistant general counsel of intellectual property (IP).

“My job is to protect the company’s IP interests while striving to mitigate risk and maximize the value of in-house counsel to the organization,” explains Rudofski about the combined company that resulted from a merger of his former employer Tellabs in early 2014. This made Coriant an international leader in communication network solutions.

“In-house counsel is uniquely positioned to serve a role that cannot be served in the same way by outside counsel, because as in-house counsel, we ideally function as an integral component of the business having a broad, but intimate and singular focus on the organization’s near-term and longer-term needs, goals, and strategy,” Rudofski continues.

When Rudofski joined Tellabs two decades ago, he was the company’s first dedicated in-house IP attorney. The opportunity arrived when Tellabs’ success caused it to outgrow the patchwork of outside counsel and other piecemeal IP resources that served Coriant in its early years. As a result, Rudofski had to build the entire IP legal function largely from scratch.

“One of the real benefits upon my arrival was that the company already understood the significant role that IP plays in corporate strategy,” he says. “It had embraced the goal of growing its patent portfolio beyond the few handfuls of patents that Coriant had in hand.”

Rudofski immediately integrated himself into the patent committee, whose members were prominent representatives from across the company. Then, he built upon the committee’s early momentum.

“Developing the IP legal function was made easier because, through the patent committee, I had immediate access to key senior management, business managers, and technologists throughout the organization,” Rudofski says. “Their insight and support was critical to ramping up not only the patent portfolio, but also the entire IP function.”

Rudofski then took the patent portfolio building effort to the next level. “We streamlined and evolved the patent committee process to increase its effectiveness and throughput while adding an award program that brought new recognition to our inventors,” Rudofski says. 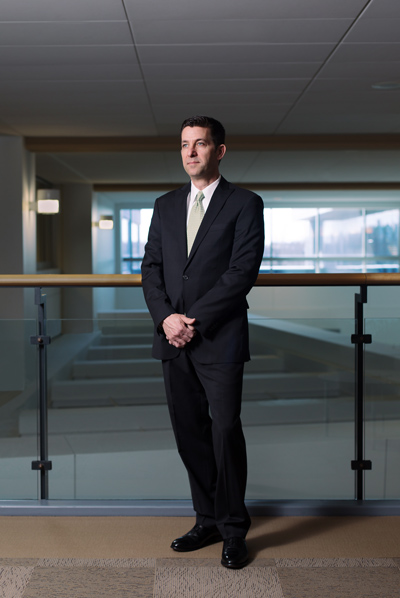 “The patent application process in general requires a commitment of time and attention not only of the attorneys, but also of the inventors,” he explains. “Moreover, there would be no patent portfolio growth in the absence of the inventors’ ingenuity and commitment to the process. It was important to me—and in turn to the company—to award, recognize, and compensate these inventors for their essential role in meaningfully growing the portfolio. The program has been a tremendous success, and through these and other efforts, Coriant steadily built a patent portfolio that independent experts have recognized for its strength and relevancy.”

It was Rudofski’s experience in building his own department that paid dividends when Tellabs merged with Coriant in early 2014. He was once again faced with utilizing his organizational development skills to extrapolate the IP legal function across the entire organization.

“It was an interesting merger because we were dealing with two similarly sized patent portfolios from two well-established businesses in the communication equipment field,” Rudofski says. “Our priority was to achieve integration in as seamless and cost-effective a way as possible. We leveraged best practices as we combined policies and processes. Since both organizations were already quite efficient and effective in the management of IP matters, we were able to immediately focus our efforts on the new entity as a whole instead of first having to address significant deficiencies in any one of the individual parts.”

Aspects of his practice that have dramatically changed since Rudofski started at Tellabs two decades ago came about as a result of globalization in the industry. Globalization has brought with it new markets, new business partner opportunities, and new competitors that were not found on the map two decades ago. There are a number of developing markets that were relatively insignificant just a generation ago, such as China and India, that today are far more relevant. With this globalization of the industry, Rudofski’s practice in turn has become more global in nature.

“Our patent-filing strategy is most effective when it correctly anticipates and tracks the continuing geographical changes in the marketplace and the competitive landscape at large,” he says. “Moreover, our business has evolved such that we now have employees, customers, and business partners in a number of geographies where previously there were none. This ongoing globalization of our own business requires a commensurate evolution of the associated IP support function.”

Rudofski has discovered firsthand that the life of an IP attorney and executive remains as rewarding as it is diverse and unpredictable.

“Most everything about the ongoing business of high-tech companies like ours has an IP component to it,” he says.

In addition to his work on the patent portfolio, Rudofski has also counseled the organization through a wide variety of matters, ranging from IP licensing and other corporate transactions to M&A and litigation. Throughout the diverse and somewhat unpredictable workflow, however, his overall goal remains the same: Protect the company’s IP interests while pragmatically mitigating risk.

Rudofski accomplishes this by properly utilizing his internal resources while still knowing when to hire outside counsel.

“Strategically leveraging outside counsel is always important,” Rudofski says. “For me, outside counsel is a critical resource upon which I rely on a daily basis, but typically only for those more discrete matters that are not better served by in-house counsel. I maximize my value to the organization by ensuring that the in-house IP legal function has the bandwidth to properly focus on those matters, which are best accomplished by an in-house counsel that is fully integrated into the business.”

It is that proximity to the heartbeat of the organization that allows Rudofski to thrive as a legal vessel. He protects the bright ideas that are conceived across the communication equipment giant, in addition to navigating Coriant through a wide range of IP matters.

“I recognize every day that I have a very privileged role,” Rudofski says. “I have worked hard to maintain that trust I have earned throughout the years.”
_____

I have had the true pleasure of working with Ken for almost twenty years. He is brilliant, thoughtful, a gentleman and scholar—detail-oriented, yet able to see the big picture and overall business strategy.