Cybersecurity remains at the forefront of serious concerns affecting the legal market. Often in-house and general counsel are actively involved in stopping these data breaches and preventing lasting impact for corporations.

Data security is a universal issue across legal specialties and continues to change and evolve rapidly. It’s key for legal professionals to remain up-to-date on this complex and multifaceted issue. Read more from Modern Counsel on the issue of cybersecurity.

To learn more about cybersecurity in the legal field, download the complimentary report from Modern Counsel, The General Counsel’s Guide to Digital Defense. The Legal Side of Cybersecurity below. 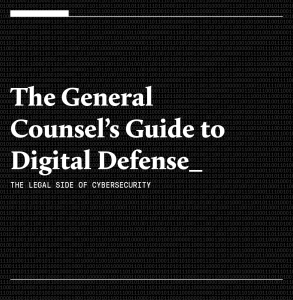 Illegal downloads maimed the music industry. The Motion Picture Association of America is leveraging voluntary initiatives to make sure they don’t do the same to film.

People love to go to the movies. The popcorn’s smell is intoxicating. The screen’s glow is hypnotic. The seat’s embrace is warm. And the surround sound is soothing—even when its swells are a cacophony of rapid gunfire, catastrophic explosions, and bombastic battle cries. Like most good things, however, a movie’s magic is easy to take for granted. After a film’s final cathartic frame, the lights come up and the audience exits. Moments later, the magic is over—unless you’re one of the few who stay seated long enough to watch the credits roll. Then, a stream of names and job titles unfurl before you—many of which you’ve never heard of, like “foley artist,” “gaffer,” “best boy,” and “dolly grip”—and you realize it was never magic to begin with. It was work. Really, really hard work.

In this moment, somewhere between the credits for assistant editor  and colorist, the impact of digital piracy becomes clear: it doesn’t just steal pocket change from movie stars; it steals living wages from the many shoulders on which they stand. “Intellectual property theft is not a victimless crime,” says Steve Fabrizio, senior executive vice president and global general counsel for the Motion Picture Association of America(MPAA), a national trade association representing the film and television industries. When a major motion picture or a major television program is unlawfully downloaded, he says, the people who are downloading it aren’t thinking about the literally hundreds of people who go to work every day to make that television show or movie.

“These are not the headliners who walk red carpets; they’re people who construct sets, do lighting and electrical, and who do catering and car services. There is an enormous infrastructure of everyday people who are hurt when content is stolen.”

Unfortunately, the problem of copyright infringement is as difficult to solve as it is harmful to tolerate. Two decades into the digital age, MPAA is rethinking its approach to quelling online piracy.

Organized Crime
Catching and prosecuting thieves is hard enough when they steal physical property. When they steal intellectual property, it can be downright impossible. “Stolen content is sold online, where it can be downloaded by millions of people,” Fabrizio explains. “This requires enforcement across borders, which is extremely difficult. These guys don’t have any of the real-world business constraints that legitimate businesses have. When one site gets shut down, they open another one elsewhere.”

With numbers that large, no single entity can stop online piracy alone. A team approach is needed, says Fabrizio, who has been fighting online piracy since 1996, when he joined the music-industry equivalent of MPAA, the Recording Industry Association of America (RIAA). At that time, illegal music downloads were flowing unfettered from peer-to-peer file-sharing websites like Napster.

“Although we didn’t understand the technology when Napster came onto the scene in 1999, we knew we had to take action right then and there; if we didn’t, the music industry would completely lose control of content and any hope of having its own online business model,” recalls Fabrizio, who was part of the legal team that won the landmark case A&M Records Inc. v. Napster, in which the court ruled that Napster could be held liable for “contributory” and “vicarious” infringement of music-industry copyrights.

In those early days of the Internet, cutting off the snake’s head was a swift and certain solution to an emergent problem. Today, there are too many snakes and too few swords.

“The theft of intellectual property has become big business,” Fabrizio says. “This is not kids like Shawn Fanning and Sean Parker, who started Napster back in the day. The people who we’re targeting now are substantial commercial businesses. It’s organized crime at the highest level.”

Target: Intermediaries
Given the scope of online piracy today, MPAA is fighting copyright infringement not only with traditional weapons like regulation and litigation, but also with new tools, such as voluntary initiatives, which engage the entire digital-media supply chain in volunteer efforts to self-police against piracy.

To fully understand what voluntary initiatives are and why they’re so important, you need to understand the basic supply and demand of stolen intellectual property,” Fabrizio says. On one end, you have supply: people who steal production copies of films from production houses or record movies in theaters. They supply a vast array of websites—retailers, if you will—that offer stolen content. On the other end is demand: users who stream or download that stolen content. In between the supply and the demand are a series of actors who knowingly or unknowingly enable, facilitate, and profit from the transmission of stolen property.

“There is a whole range of intermediaries without which these pirate sites would not be able to operate,” says Fabrizio. “We’re addressing these intermediaries because we believe they have an obligation to mitigate the harm that’s occurring through their systems, not only from a legal perspective, but from a moral perspective.” The same pirate sites that offer illegal content are often rife with other dangers to consumers, ranging from identity theft to malware to illegal drugs and pornography. “You can try to legislate rules, and you can try to litigate behavior—both of which have their place,” says Fabrizio, “but first and foremost, we believe that it’s in the long-term interest of all these players to work with us to create a safe and secure Internet.”

“Voluntary” Solutions
By working together, stakeholders participating in voluntary initiatives can pool resources not only to extend their reach, but also to develop more creative solutions to the piracy problem.

One of the earliest examples is the Copyright Alert System, administered by the Center for Copyright Information (CCI). Formed in 2011 as a collaboration between the content-creating community and Internet service providers (ISPs), CCI includes among its members MPAA, RIAA, the Independent Film & Television Alliance, the American Association of Independent Music, and five of the nation’s largest ISPs: AT&T, Cablevision, Comcast, Time Warner Cable, and Verizon. Utilizing that partnership, the Copyright Alert System leverages consumers’ Internet services to educate them about copyright infringement when it occurs.

“[The Copyright Alert System] is much better than litigating our way toward a solution or trying to have Congresslegislate one.”

Here’s how it works: When artists and content owners see that someone has put music, movies, or TV shows online without permission, they notify the appropriate ISP, which issues a notice—called a copyright alert—to the consumer who posted the content. The alert informs the consumer that his/her account was used for unlawful activity and educates him/her on ways to prevent further copyright infringement. If the behavior continues, the ISP may temporarily reduce the consumer’s Internet speed or redirect the consumer to a landing page until he/she contacts the ISP or completes an online copyright education program.

“Historically, ISPs and content owners were always fighting. Over the course of a couple years, however, they negotiated this voluntary initiative,” Fabrizio says. “The program is now in its third year, and it has greatly improved the relationship between ISPs and the content community. We now sit around the table and discuss issues in a way we couldn’t before. It’s much better than litigating our way toward a solution or trying to have Congress legislate one.”

Another recent voluntary initiative is the Trustworthy Accountability Group (TAG). Though it’s still in its nascent stages, it ultimately will accredit third-party businesses that score websites based on their lawfulness. The scores will be furnished to advertisers so they can do a better job funneling advertising dollars away from illicit websites.

“It’s kind of like a credit score for websites,” explains Fabrizio, who says MPAA, likewise, is engaging payment processors, domain name registrars, and search engines to develop voluntary initiatives tailored to their specific businesses. So far, most of the companies it’s approached have been receptive, with one notable exception: Google, which, in a very public dispute with MPAA, has accused the association of trying to censor the Internet. “If there’s one con with voluntary initiatives, it’s that it takes two to dance,” Fabrizio says. “While most of the responsible players in the Internet community have expressed a willingness to work with us, there’s still a mind-set among some in the Internet community that an open and free Internet somehow means that content should be free for the taking.” Open and free are great—MPAA supports them, says Fabrizio. “But what we’re talking about here is garden-variety theft. You can put lipstick on a pig, but it’s still a pig.”

Though not everyone in the Internet community has come around yet, Fabrizio thinks they eventually will. “Five to ten years from now, I envision an era in which the Internet community embraces protection of intellectual property, because it’s only through having a safe and secure Internet that the Internet is going to continue to flourish,” he concludes. “You can never end piracy, but you can contain it to a level where it does not disrupt the ability of legitimate businesses to take hold, and I believe that we will be able to accomplish that with voluntary initiatives.”

Read additional articles related to cybersecurity risks and legal professionals battling against them in Modern Counsel.