For so long, Pepsi’s advertising hook referred to the “Pepsi Generation,” but when Tony West speaks, he’s not leaning on old taglines or commercial-jingle lyrics. PepsiCo, he says, must define to itself (and others) what it means to be a corporation in the twenty-first century.

In his role as PepsiCo’s general counsel, West takes on many responsibilities to ensure the company is not only defining itself, but also achieving the lofty goals that it sets. From environmental and sustainable concerns to hiring a diverse array of talent, working with compliance and ethics, and even serving as president of the company’s foundation, West is fully invested in the company’s success and setting an example for others to follow.

Given his background at the US Department of Justice, he also brings a unique perspective on creating the partnerships that will define how government, private sector, and philanthropic partners solve some of the bigger issues that aren’t just facing business, but also society as a whole.

It’s big talk, but West has the stature and poise to follow through on lofty ambitions.

Can you elaborate on what it means to be a company in the twenty-first century and why it’s important for PepsiCo to embrace that challenge?
There are a lot of big challenges facing society that people are grappling with all over the world. We’re in the midst of a pretty significant shift. You’re seeing increasing income inequality; environmental issues that are beginning to have a real impact on people’s lives; and dealing with major shifts and changes lead to uncertainty in people’s lives. Traditionally, people would often look to governments to solve big problems, but these are challenges that are just too big for governments alone to handle—and frankly, they’re too large for philanthropy or the private sector alone to handle. When you think about companies for the twenty-first century, you can’t help but think about what it means to create model leadership. That means people from all different sectors collaborating and working in concert.

What that means for a company like us is defining a business model. Our business model is one that says we must absolutely ensure we’re operating in a way that maximizes our shareholders’ value. We must add value to the communities in which we operate, because if we don’t do that, we’ll lose our social license to operate. If we lose our social license to operate in different communities around the world, then we can’t create sustainable value for our shareholders. You have to be focused on performance quarter over quarter, but also have to manage the duration of returns over the long run. Are we operating in ways that are sustainable? Are we reducing our carbon footprint? Are we reducing our water usage through reclamation and recycling? Are we reducing our waste footprint? Are we hiring people to ensure that we are bringing value to the talent equation around the world in a way that diversifies the company and brings a diversity of strengths? These are hallmarks of what it means to be a twenty-first century company, and working with partners in philanthropy and in government is part of how we can tackle the big challenges facing the world.

Are there any immediate examples of how PepsiCo is setting out to answer these questions or face these challenges?
One of the best examples of this is the recent announcement of our new “Performance with Purpose” goals. It’s an agenda that lays out how we’re going to grow our business over the next ten years in a responsible way that responds to changing consumer and societal needs. When you look at the goals, they have three parts to them. One is improving the health and well-being of our portfolio of products so that we’re responding as more consumers look for healthier options. We also have goals toward protecting the planet and reducing our environmental impact in terms of greenhouse gas emissions and improving water efficiency. The third set of goals is centered around empowering people that we interact with around the world. This is where we’re going to leverage the power of our foundation, where we plan to invest $100 million to support initiatives to benefit at least 12.5 million women and girls around the world. 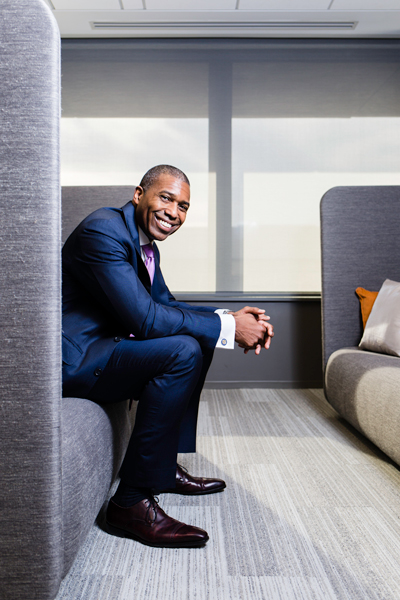 Having been in a government role and now working in the private sector, do you have a new perspective on how collaboration between the areas that you mentioned earlier—government, business, and philanthropy—functions?
In the government, we used to talk about public-private partnerships, and you’ve seen [former President Barack Obama’s] administration in particular look for opportunities to try to create social good and social benefits through public-private partnerships. PepsiCo is certainly involved in a number of those with the White House. Now being in the private sector, I can see those opportunities even more clearly. I see how important it is for government, business, and philanthropy to think very holistically about our competencies. Government has scale and the power to convene. Philanthropy has an acute sense of where the greatest needs are. Business can often bring innovation to the table—perhaps in a way that the other players cannot. So everybody can bring to the table a real set of competencies and skills. It’s not that we do this out of the goodness of our hearts—it’s a good thing to do and certainly we’re all better for it—but the fact of the matter is we really don’t have a choice. That type of collaboration is the only way I think we can deal with some of the major issues that face the planet. It behooves everybody to have those private sector players operating from a strong set of principles and values that are universally shared
and respected.

What would you say are your greatest challenges as a general counsel for a major corporation?
The general counsel is no longer simply a lawyer in the company. It’s a business partner, an advisor, a counselor to the CEO, and a counselor to the board. The GC is often called upon to deal with complex legal and business issues, which are often intertwined with public policy and government issues. All of them impact risk and require someone to consider how we mitigate risk. With that environment, my biggest challenges have been dealing with the pace of change in the regulatory landscape—in our case, taxes on certain products [and] labeling of certain products, all the way to restrictions on the use of water in certain places because of water shortages. Anything along the supply chain to the finished product and how we market and sell that product is subject to regulations, which differ from country to country.

The other challenge in this type of business environment that’s constantly changing is ensuring we have a resilient and motivated team. I think the so-called “war for talent” is one of the biggest challenges that any modern corporation faces. It’s important that you get the absolute best talent you can find. You do that by fostering an environment where people can not only come to work and have a rewarding professional life, but also a place that they see their own personal values reflected. It’s important for today’s professionals to want to be part of something that is more than simply putting out a product or making money. Creating that environment where people can be a part of something that’s bigger than themselves—and has significance beyond their own parochial concerns—is absolutely essential.

When you’re building a team, are there certain traits that you look for right off the bat, or is being part of the team at PepsiCo something that’s cultivated through experience?
It’s a little of both. I certainly look for experience, talent that is credentialed and reflective of a competency to do the job at hand. I’m also looking for great judgment—particularly when I’m hiring lawyers—and great potential. I was someone who was fortunate to have people who would promote me before I was technically ready, but knew that I could grow into the job. So I look for people who can grow into a role, who are willing to stretch themselves, and who can sort of punch above their weight. I find that those are sometimes the best hires that you can possibly make—people who have learning agility.

How do you find the culture at PepsiCo measures in comparison to your previous positions?
One of the things that’s very important to me and one of the things that attracted me to PepsiCo is that it’s a place built on strong values and sound culture. For someone who was coming from a very mission-driven organization with the Department of Justice, it was very important for me to find that place that really believed in an ethical culture and lived that in the way it did business. The diversity of issues that come across my desk every day is really exciting and energizing.

With so many different issues coming across your desk and the pace of regulatory changes, do you find it helps to have a system in place to manage everything, or is it better to take it as it comes?
There’s a bit of both. When you think about the wave of regulations that came in with Dodd-Frank or some of the new regulations around compliance and risk mitigation, we set up processes to meet a lot of those concerns that are consistent with the Justice Department’s criteria for model compliance programs. Still, I’ve learned that’s not enough. That’s your floor, and that’s what you need to do, but if you really want to make sure you’re dealing with a lot of these issues most effectively, you have to create a culture in your organization that’s very flexible, doesn’t fear change, can handle changing landscapes, roll with those punches, and be responsive in a constructive way. I think that is the key differentiator. You want to have an organization that’s nimble—that can navigate the change and not get stymied by it, but instead see it as an opportunity to grow and flex its muscles.

Law remains one of the least diverse sectors in the nation among comparable professions. But Tony West and PepsiCo are working to change that statistic with the launch of the Larry D. Thompson Legacy of Leadership Fellowship Program.

Founded by West in honor of PepsiCo’s former General Counsel Larry D. Thompson, the summer fellowship program is designed to promote diversity in the legal profession and advance PepsiCo’s commitment to supporting the development of professionals from diverse backgrounds.

Last year, PepsiCo received more than 200 applications for the program and ultimately welcomed four impressive fellows. As part of this new initiative, the fellows furthered PepsiCo’s commitment in supporting a workforce that reflects the diversity of the communities the company serves and in which it operates. For ten weeks, fellows work side by side with PepsiCo’s attorneys in New York and Texas to gain an inside perspective into what it means to be an in-house counsel at a Fortune 50 company. From weekly seminars to community service to learning from attorney mentors, fellows gain a deeper sense of meaning in pursuing a legal career. “At PepsiCo, diversity and engagement is not a special program; it is a way of doing business,” West says.