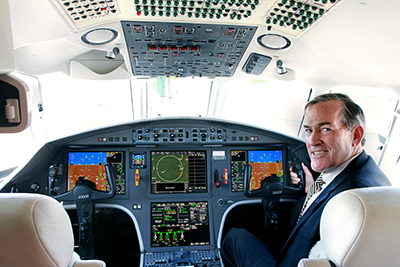 He had left the Navy training base at Andros Island in the Bahamas to attend a board of directors meeting at Dassault Falcon Jet (DFJ) in New Jersey. While in the meeting, he learned that the helicopter he was supposed to have been on had crashed, killing all four people aboard.

“My gear—helmet, boots, flight jacket—were still on board the helicopter. They floated to the surface where it went down,” he recalls. “If I had skipped the board meeting and left when originally scheduled, I would’ve been on that flight. I feel extremely fortunate to be alive. After that, my call sign in my squadron became ‘Lucky Pierre,’ because DFJ’s parent company is based in France.”

Rothwell and his twin brother John grew up dreaming of becoming pilots like their maternal grandfather, Julius Von Der Heyden, who had been a pilot for Franklin and Eleanor Roosevelt during the 1920s. Both boys graduated from Tufts University and then Navy flight school. Peter was stationed in San Diego and Japan, where he was assigned to the shipboard, antisubmarine warfare (ASW) group. “We flew off frigates and destroyers trolling the Pacific and Indian Ocean looking for Russian submarines.”

The helicopter pilots conducting these ASW missions were sent to Andros Island for training. “Our goal during the training was to try to catch US subs in the area. The torpedoes we dropped didn’t have warheads, but the drills were still very real.”

Rothwell joined the Reserves in 1978 after six years of active duty. By the time he retired in 1998 as a Navy captain, he had held three commands—including overseeing 200 enlisted men and women temporarily assigned to the nuclear aircraft carrier USS Abraham Lincoln—and earned a master’s degree in public administration and a law degree from Temple University.

But he didn’t make the Navy his career. “I guess I was tired of interacting mostly with machines and small flight crews,” he admits. “I wanted to work with people in a corporate environment and help solve legal and business problems.”

It was problems—or more specifically, product liability concerns—that became his legal niche. “We had a couple of crashes while I was in the Navy, including the one I described earlier, which I took to heart. So in law school, I took several product liability courses.” This helped him land the job at DFJ, which is owned by a parent company that manufactures the Mirage fighters and Falcon business jets. “Hard to believe I’m still here thirty-two years later, but it’s been a great fit for me.”

As corporate secretary and general counsel for five of DFJ’s subsidiaries, Rothwell’s combination of legal expertise and flight experience make him a valued adviser for the flight operations, sales, marketing, and customer service departments. “For instance, sales and marketing know customer service is critically important,” Rothwell says. “As a pilot, I understand the urgency of getting replacement parts where and when customers need them. As a result, DFJ ships spare parts to customers within two hours, no matter where the aircraft is.” The company has 1,427 Falcon customers in the Western hemisphere and 617 in the Eastern Hemisphere.

A high degree of teamwork is required to accomplish this “on-time delivery,” which comes naturally to Rothwell. He was on the ski team and played football and baseball while at Tufts. He still powder skis ten to fifteen days per year and is an avid windsurfer. “You can tell a lot about a person from the kinds of sports they play,” he says. “For instance, people on rowing, soccer, football, or basketball teams are usually great to have working alongside you, since they’ve learned how to sublimate their characters, collaborate, and persevere through challenges for the benefit of the team.”

Another advantage of Rothwell’s experience, including two years as a Navy flight instructor, is his approach to safety. “I work very closely with our risk analysis guy,” Rothwell says. “He tends to see the glass as half empty. I see it as half full. He will worry over possible problems, while I try to see them as opportunities to make things better. If you think something could potentially go wrong, investigate it thoroughly, get all the facts you can, and then make a plan to minimize the possible risks. Information and experience are your friends.”

To ensure he has the latest data regarding safety trends and technology, Rothwell is on the corporate advisory board of the Flight Safety Foundation, a nonprofit organization that collects statistics, sets priorities, provides education, and serves as a catalyst to address flight safety issues. He also participates in the Navy Reserve Association and the Navy War College Foundation. The latter group helps administer the training of US and foreign naval officers, and offers educational workshops and seminars on military strategy and policy.

“Though I now spend most of my time making sure the company’s aviation business is running smoothly, I still love flying,” Rothwell says. “I like gliding and will occasionally sneak into one of the Falcon flight training simulators.” Working for a flight company certainly has benefits.

Editor’s Note: After thirty-two years with Dassault, Peter Rothwell has retired from the company.